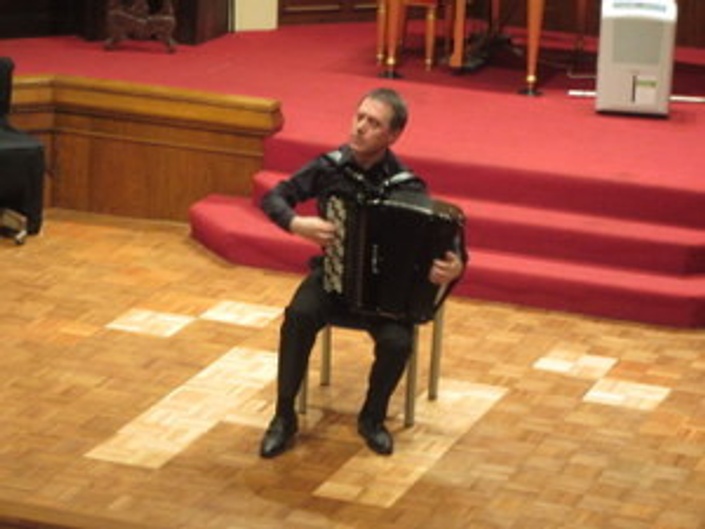 Stas Venglevski
His artistry, dazzling technical command, and sensitivity have brought Stanislav, "Stas," Venglevski, a native of the Republic of Moldova, part of the former Soviet Union, increasing acclaim as a virtuoso of the Bayan. A two-time first prize winner of Bayan competition in the Republic of Moldova, Stas is a graduate of the Russian Academy of Music in Moscow where he received his Masters Degree in Music under the tutelage of the famed Russian Bayanist, Friedrich Lips. In 1992 he immigrated to the United States.
Stas is an Accordionist, a Musician, an Arranger, an Entertainer and a Teacher. Stas' repertoire includes his original compositions, a broad range of classical, contemporary and ethnic music. He has toured extensively as a soloist throughout the former Soviet Union, Canada, Europe, and the United States, including numerous performances with Doc Severinsen, Steve Allen and with Garrison Keillor on the Prairie Home Companion Show. Additionally, he has performed with symphony orchestras throughout the United States. He performed the world premiere of Concerto No. 2 by Anthony Galla-Rini and also the world premiere of Bayan and Beyond, composed for Stas by Dan Lawitts.
He is a regular participant the Milwaukee Symphony Orchestra's Arts in Community Education Program (ACE); has performed with the Chicago Symphony Orchestra and the Tacoma Symphony Orchestra; has done television commercials and performed in theater productions; produced numerous recordings including a transcription of Tchaikovsky's Nutcracker Suite for Bayan as well as one of original compositions. He has published several books of original compositions.
Stas founded Accordion XXI Century Series in 2010 so that the Midwest audiences can experience the amazing range of the Accordion and Bayan by bringing gifted artists from all over the world. In a concert setting, these gifted musicians share their skills and cultures to provide the audience with a unique musical experience. The performances feature the Accordion or Bayan in solo presentation and, when possible, in concert with other instruments.

The brilliant artistry and musical virtuosity of Stas afford an expanded dimension in music and an innovative musical adventure to the audience.

Concert
Available in days
days after you enroll